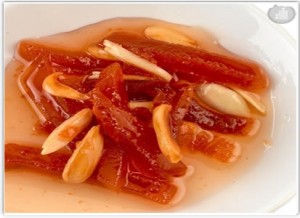 This golden-yellow fruit is hard with sour taste and thus not easily consumed raw. When processed with heat however it becomes very sensitive. The margins for the success or failure of the sweet are very narrow. In our workshop, being very well aware of the sensitivities of this fragrant fruit we treat it exactly as we should. We have managed to bring out the sweet orange-yellow color and the velvety texture alongside the wonderful aromas of pelargonium root and crunchy almonds, giving a unique, divine taste in our sweet.

• The fruit
Quinces are cultivated and consumed for more than 4000 years, while there are dozens of references to the fruit in history and mythology alike. In the Old Testament it is believed that the forbidden fruit given by Eve to Adam was not an apple but a quince. In ancient Greek mythology, it is described as ‘the golden apple’ and is believed to be the fruit handed over by Paris to the Goddess Aphrodite so he can have Helen in return. Ancient Greeks had linked quince with fertility and it played an important role in the festivities accompanying wedding ceremonies. According to traditions, the groom offered a quince as a gift to the bride to sweeten her breath before the ceremony. It is not surprising with such a role that the quince ended up being recognized as the fruit of love, passion and fertility. As far as the nutritional value of the fruit is concerned, it is fair to say that it is simply unique! It contains very few calories (50-60 per 100 grams), but it contains remarkable quantities of natural fiber, vitamins, trace elements and anti- 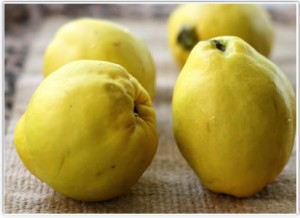 oxidants. In particular, it has a high concentration of vitamins C, A, Thiamine, Riboflavin, and Pyridoxine (Vitamin B-6). The fruit is rich in copper, potassium, magnesium and iron, while it contains notable quantities of phytochemicals and autoxidizing substances such as proanthocyanidins. It is rich in natural fibers as 100 grams cover 10% of daily requirements in fiber, as well as pectin, a type of natural fiber particularly beneficiary for our health.