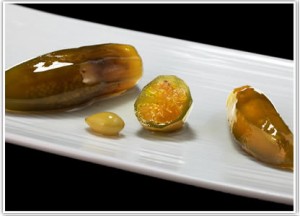 The aubergine used in our workshop are cultivated in the beautiful mountain plains of Saint Nicolas in Kyrtoni, kept cool by the breeze coming from the Atalanti shore. Each small aubergine contains a small almond and the result is a taste trip worth taking, as it combines the sturdiness of the fruit with the mature sweetness of the flavor. We suggest it without any reservation.

• The fruit
The plant Solanum melongena, also known as eggplant or aubergine is closely related to the tomato and potato plant. It is a perennial tropical plant but is also cultivated as annual in mild climates beyond the tropics and grows from 40 to 150cm. The stem is often thorny. Its flowers are white or purple, with five sections in the corolla. The fruit from a botanical perspective is classified as a ‘berry’ and contains many soft seeds with a bitter taste, as these contain nicotine alkaloids – not surprising as the plant is related to the tobacco plant. A study conducted in 1998 by the biology institute of the Sao Paolo University in Brazil has proven that aubergine juice can help reduce one’s weight, reduce cholesterol levels and cholesterol presence in the vascular system. The plant originates in the Indian subcontinent but it has been cultivated in southeast Asia even at prehistoric times. In the Western world its existence did not become known before 1500. During the 17th and

18the centuries in England aubergines were known as the ‘Jew’s apple’ as they were particularly popular among Sephardi Jews who are most likely the ones who brought the plant to England. Aubergines are consumed cooked and are the base for many well-known dishes. In Greece, small tender aubergines are turned into sweet preserves.