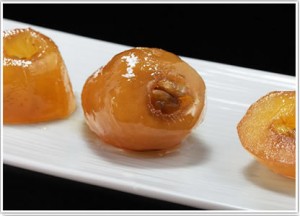 The sweet firiki we propose has a deep mellow flavor that comesfrom both the apple and the large pieces of nut that hide into every little apple.

• The fruit
The apple is the pomaceous fruit of the apple tree, species Malus domestica in the rose family (Rosaceae). It is one of the most widely cultivated tree. Apples have been grown for thousands of years in Asia and Europe, and were brought to North America by European colonists. There are more than 7,500 known cultivars of apples, resulting in a range of desired characteristics. Different cultivars are bred for various tastes and uses, including in cooking, fresh eating and cider production. Apples have been present in the mythology and religions of many cultures, including Norse, Greek and Christian traditions. In Greek mythology, the Greek hero Heracles, as a part of his Twelve Labours, was required to travel to the Garden of the Hesperides and pick the golden apples off the Tree of Life growing at its center. The proverb "An apple a day keeps the doctor away." is addressing the health effects of the fruit. Basic research suggests that apples may reduce

the risk of colon cancer, prostate cancer and lung cancer. The Greek variety Firiki is found mostly in mountainous and hilly areas of the country. 150-200 years ago appeared in Pelion one unique apple, small in size slightly sour taste: the firiki, the tame and wild (not edible). The firiki had significant advantages over other cultivars: an apple was resistant to diseases and high strength after harvest.